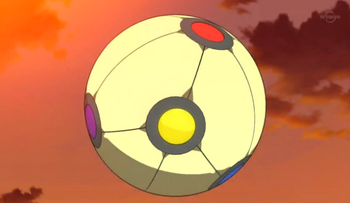 It was first used in Episode 1 by Alpha. He used the time travel mode to take Tenma to his past. Then, he used the strike mode to stop Gouenji's ball when it was used to save Tenma from the falling planks and later the teleport mode. These three modes were used many times again by Alpha during the next three episodes.

In Episode 5, it was used, certainly by Beta, to brainwash the spectators, the arbiter and the commentator. They also used it to change the Japan's uniform to their true uniform, Protocol Omega 2.0's uniform.

In Episode 6, it was used again by Beta to make Raimon's players hate soccer. Though, all the Keshin users and Fei Rune resisted to it. Then, it was used to seal Fei to study him. However, Endou used God Hand V to stop her from sealing Fei and said to Raimon to leave the match. After that, Endou got sealed.

In Episode 11, it was used again by Beta in order to seal Endou Daisuke away, but he used his willpower. That made him transform into a Chrono Stone.

As seen in the Episode 17 of the anime, the mind control mode can be undone, as soccer and Raimon's members precedently brainwashed by Beta were made back to normal.

In Episode 18, Zanark Abalonic was seen having a red Sphere Device, which has the same functions as the regular Sphere Device El Dorado has.

In Episode 20, Zanark used the light blue button of his Sphere Device: it didn't time-travel him, but created a soccer field on the top of the castle.

In Episode 32, Rei used the blue function on his Sphere Device.

Community content is available under CC-BY-SA unless otherwise noted.