Being Mixi Maxed with Master Dragon, she became the 9th member of the Ultimate Eleven, being discribed as a fantastic libero in the Hasha no Seiten.

She has long brown straight hair and also has brown eyes. She wears an orange headband. Unlike the main female uniform of Raimon, she seems to wear a cream vest on top of her white shirt. She also wears an orange ribbon tied around the collar of the white shirt and still wears the blue skirt just like the other female Raimon members. Nanobana is somewhat small if compared to her teammates.

When she first appeared in Episode 18 she was really cheery and joyful to become a Raimon player. She seems to be very positive and sunny most of the time. She is also quite kind and a little bit childish, though this masks her personality of being serious and understanding. In Episode 21, it was shown that she gave the position of being mixi maxed instead to Kirino, since she understood Kirino's will and desire to help.

She first appeared in Episode 18 in which she was shown running towards the clubroom in her school uniform. Though, when she enters the clubroom, she is shown to have worn the Raimon soccer uniform and happily says, "Captain! Welcome Back!" to Matsukaze Tenma, who had just returned.

Tenma, Shinsuke, Aoi, Midori and Akane thought that she was a new manager but she explains that she's Raimon's new ace striker as she reveals her shirt number; being number 10 and shocked Shindou and Tsurugi. Hamano explains that when they were away, Nanobana was in the team, serving as the ace striker. Fei explained that this is probably the cause of Time Paradox.

Suddenly, Nanobana decides to switch her uniform, and was about to remove her soccer uniform in front of everyone when Midori, Aoi and Akane suddenly cuts in and blocked her, after which Tenma and Shinsuke suddenly turned to the opposite direction. Everyone then comes to the other soccer training place and talks about what they have to do next. Daisuke explains that they need to go Jeanne D'Arc's era and Nanobana volunteers herself to Mixi Max with her, as both of them are girls. She was happy then when she was

chosen to be one of those to time travel with the Raimon team. In Episode 19, she and the other members of Raimon met with Jeanne d'Arc. Wonderbot tried to Mixi Max her with Jeanne, but it failed. Then, Nanobana asked Jeanne to play with her. She practiced with Tsurugi, and was seen to easily steal the ball from him and Tsurugi compliments Nanobana that she can play as a defender. Tenma calls her Nanobana-san, but Nanobana asked why Tenma was so formal when he used to call her Kinako. She is later seen along with

Shinsuke, Tenma, Tsurugi, Kirino and Fei, who went with Jeanne to a battlefield. In Episode 20, she encourages Jeanne to have a meeting with Charles VII. She was also seen to have been listening secretly to what Jeanne and Kirino were talking about, which was what about what they can do. Later, she invites Charles to play soccer along with her and Tsurugi against Tenma, Shinsuk

In Episode 21, after Tenma lifted the team's spirits, Kinako tells him he is right and that the team would do their best. Later, as Dhanna passed the ball to Bahamusu, she intercepted it, kicking the ball to the side line. Tenma then congratulates her, and Kinako asks to Jeanne if she'd seen it. However, the girl was too scared to watch the match. In the second half, she was placed as forward with Kirino. She said that her main position is forward and that she could show here skills but Charles said that they should go with his strategy. When Wandaba was to made Mix Max between her and Jeanne, she tells him that he should do it with Kirino in her place. She was later happy as the Mix Max was successful and that she understood that Kirino should Mixi Max with Jeanne and not her.

In Episode 22, after Taiyou appeared , she said "It's been a while." to him and he answered yes which shocked most of the Raimon members. Later, she was chosen to go to the three kingdom era. At the era, Raimon met Liu Bei and helped him to push his canon out of the mud. Then, she, some Raimon members and Ryuu Gentoku challeged some members of Zanak Domain, Chouhi and Kanu to a soccer battle. As Rasetsu tried to made a pass to Zhang Fei, she intercepted it and made a pass to Tenma. When Liu Bei left the Raimon goal opened, all the Raimon members including her were shocked.

In Episode 23, after Shinsuke couldn't stop Terracotta's Gear Drive, she used Mochi Mochi Kinako Mochi to block it, being sucessfuly to do so.

In Episode 25 , she intercepted another shoot that made Shinsuke try harder and successfully stop Zanak.

In Episode 26, she asked some men in the area where Okita could be, in which Midori blocked her mouth. Throughout the whole episode, Midori had to watch what Nanobana did.

She also joined the group again in Episode 31. When Daisuke said that one of the powers would go to a flying defender, she immediately volunteers herself, which he accepts. Later in the episode, she is seen watching over Tenma and Fei training at night.

In Episode 32, she listened at Fei revealing to Big that he has been abandoned by his parents. In Episode 33, she finally unleashed her keshin Akatsuki no Miko Amaterasu and used Kourin no Ya to pass through members of Perfect Cascade in the match.

She was chosen as a member for El Dorado Team 01. She was very worried when Fei collapsed due to his headache. She stayed with him at the hospital. During the match against Zan she was really worried about the Tsurugi's injury.

In Episode 041, she managed to use her Keshin Armed for the first time and she also used her Mixi-Trans. She was also very sad when Fei went back to Second Stage Children and shot in his own goal.

In Episode 042, she was seen watching the match of El Dorado team 02 and Giru along with the others. She was also worried about Fei.

In Episode 46, she revealed herself as Fei's mother, which shocked everyone, except Asurei and Wandaba.

In Episode 47, in a flashback, she was seen talking to Asurei. She along with all of the Raimon team welcomed back Fei. 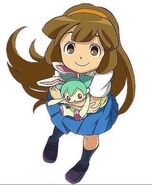