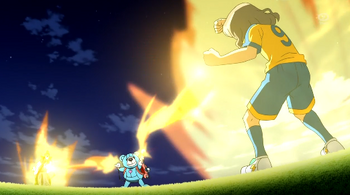 Mixi Max is a new feature, which can fuse someone's aura with someone else's aura, combining their personality's and abillities, in the Inazuma Eleven GO Chrono Stone series.

In the game, it is possible to Mixi Max any player with any other player in your team, in addition to specific Mixi Max like Shindou with Oda Nobunaga, offering a great number of combinations. When selecting a player's aura, it is also possible to select hissatsu techniques to give to the player on the receiving end.

Mixi Max is done by Clark Wonderbot with the Mixi Max Gun. It first appeared in Episode 2 to fuse Fei's aura with Tyrano's aura.

In Episode 11, Beta used the Ghost Mixi Max to give her power to Protocol Omega 2.0.

It is used in Episode 17, to fuse Nobunaga's aura with Shindou.

It appeared again in Episode 21 to fuse Jeanne d'Arc's aura with Kirino's aura.

As seen in the crossover movie Inazuma Eleven GO VS Danball Senki W, Taiyou used his Mixi Trans with Shokatsu Koumei, meaning the movie events take after the period when Raimon is in the Three Kingdoms era.

One person's aura is taken and fused with the aura of the other person via Mixi Max Gun.

In order to work, the person receiving the aura must be at least of equal strength as the other person in order to absorb the aura and be able to complete the fusion. If they are not strong enough, the Mixi Max will result in a failure.

A better understanding of the person's nature and personality also helps being "compatible" with them.

Retrieved from "https://inazuma-eleven-go-chrono-stone.fandom.com/wiki/Mixi_Max?oldid=19619"
Community content is available under CC-BY-SA unless otherwise noted.