Kariya Masaki (狩屋 マサキ) is one of the supporting characters in the Inazuma Eleven GO Chrono Stone series. He is a defender for Raimon.

He has teal hair and a normal height. He has sharp eyes with a colour of brownish-gold in his irises. When he is wearing the soccer uniform, he tucks in his shirt.

He appears to mask his rude demeanor and negativity towards others with a calm, timid personality. In other words, he's good at deceiving people. Yamana Akane even describes him to be scary looking.

His negativity can be like making violent tackles, the only difference is that Kariya does not show his violent attitude all the time and mostly hides it. He sometimes he tricks a person or teammate. He and Kirino Ranmaru also seem to develop a dislike or rivalry towards each other when they first meet. Later, he pretends to have a stomach ache so Kirino could go time travel instead of him., so they are nice to each other again.

In Episode 1, he was seen holding a violin with Hikaru. Just like everyone else, he didn't recognize Tenma at first. His club remains unknown although it's hinted that they may be in the music club.

In Episode 3, he appeared alongside with the Raimon soccer team. They remembered their memories for soccer again but they didn't know who Tsurugi Kyousuke was. He agreed to help Tsurugi Yuuichi, Tenma and Fei Rune to bring back the soccer and stop the plans of El Dorado.

In Episode 6, he replaced Shinsuke as defender in the match. He got injured immediately by some Protocol Omega 2.0's members. After the match, Raimon went back to their timeline. When they arrived, Kariya left the team like the others who didn't have a Keshin because of Beta's mind control.

In Episode 18, he reappeared again with the other members who were under control. He was seen trying to block Shindou's Mixi Max form but it failed because Shindou was too fast. After the practice, he was seen talking to Kirino. The next day, he was seen talking to Kirino again in the soccer club room. He said that Kirino is jealous of Shindou because Shindou has a Keshin, can use Keshin Armed and Mixi Max. After he was selected for the team which was going to the Jeanne d'Arc era, he offered his place in order to give it to Kirino.

In Episode 22, he was seen traning with Tsurugi, Kurama and Shinsuke. Later, he was selected by Daisuke as one of the members who would time travel to Ryuu Gentoku's era. As they arrive, he is seen searching for Ryuu Gentoku at a forest. He was scared when Kanu repeatedly pointed his lance at Raimon's d

irection. Later, he wasn't chosen to play the soccer battle against Rasetsu, Shuten, Engiru and Ryuu Gentoku's half brothers, Kanu and Chouhi. Kariya watched the match and was seen encouraging Tsurugi after he stealed the ball from Rasetsu.

In Episode 23, he and Kurama were scared as they saw the Terracotta soliders walking. Later, during the match against them, he and Kirino were tired, leaving one of the soldiers easily dribble them. In the end, Raimon won by 2-1 with the two goals made by Taiyou; one with Taiyou Shin Apollo's mighty shoot and other with Sunshine Force.

In Episode 28 and Episode 29, Kariya alongside his teammates were playing against Zanark Domain. He used Hunter's Net to stop Goburis but it failed. Later, he evolved Hunter's Net into V2, and this time, he stopped

Goburis and passed the ball to Taiyou. At the end, Raimon won with 3-2.

In Episode 40 when Second Stage Children destroyed El Dorado's base and created Ragnarok Stadium, he said something that made SARU glare at him, which frightened him. 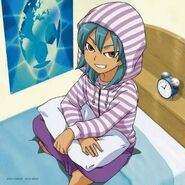