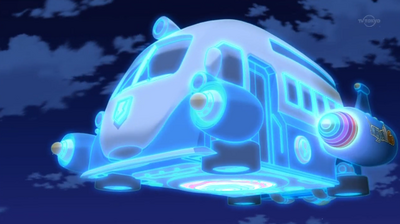 The Inazuma TM Caravan is a feature in Inazuma Eleven GO Chrono Stone.

The Inazuma TM Caravan has the ability to fly and is also a time-machine. But to go through the different times, something is needed: an Artifact. It has to have something with the timeline people want to go. After clearing the game, it can bring you everywhere where you have been.

It first appeared in the anime at the end of the Episode 1, driven by Clark Wonderbot, which made Tenma very surprised about it.

It was used many times again, so Tenmas and later Raimon can go to different times. It's principally used for the quest of the Ultimate Eleven.

As now, the artifacts used were:

Retrieved from "https://inazuma-eleven-go-chrono-stone.fandom.com/wiki/Inazuma_TM_Caravan?oldid=16824"
Community content is available under CC-BY-SA unless otherwise noted.