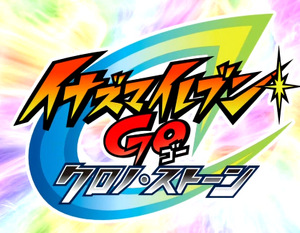 The story begins following Raimon's success on the Holy Road soccer tournament. Tenma returns to Raimon Junior High, but finds out that things have changed. The Raimon members are not soccer players anymore. In fact, there is no soccer club at the school. Shinsuke is in a different club from Tenma. Is this a parallel world? Tenma wonders.

That's when Alpha appears before him.

The organisation called El Dorado is an organisation formed by the future world's countries to deal with important matters of world affairs, and for some reason, they've determined that soccer must be destroyed. To do so, they have assigned Alpha and his team, Protocol Omega to the mission of ridding soccer from the world.

There are new characters that appear in the Inazuma Eleven GO Chrono Stone series, but there are also some characters from the previous series that will also appear.

The Inazuma Eleven GO Chrono Stone series starts after the Holy Road tournament. There are new episodes every Wednesday.

There are new hissatsu techniques that are learned and shown in the anime, at the same time, there are some hissatsu shown from the previous series also.

There are new teams shown in Inazuma Eleven GO Chrono Stone, and some teams still remain though with new members.

Keshin's area new feature shown in the anime. It is the “avatar” of the person and is used in various matches in Keshin Battle. It can be now fused with its user to create a Keshin Armed.

Retrieved from "https://inazuma-eleven-go-chrono-stone.fandom.com/wiki/Inazuma_Eleven_GO_Chrono_Stone_(anime)?oldid=19180"
Community content is available under CC-BY-SA unless otherwise noted.