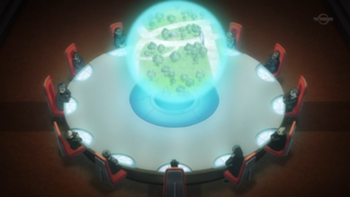 El Dorado is an organization in the Inazuma Eleven GO Chrono Stone series.

They appeared in the first episode of Chrono Stone.

In the Episode 3, their leader, Toudou Heikichi, was saying to Alpha that he was disappointed of his defeat 2-0 against Tenmas, and that he acted weakly with Protocol Omega.

In the Episode 10, Toudou was about to send Einamu and the others to the Eternal Prison, but Beta asked him to give them a last chance.

In Episode 17, Toudou Heikichi is seen holding a purple Chrono Stone, in which Endou Mamoru is imprisoned.

In Episode 18, Toudou Heikichi and the others commanders were talking about Nanobana Kinako, Raimon's ace striker. Later, Gamma appeared, taking Beta's place as the captain and replaced Dorimu, Gaura, Neira and Zanou with Rujiku, Galling, Dhanna and Bahamusu, to create Protocol Omega 3.0. Later, Toudou and the others are seen watching Zanak Abalonic through the Route Craft's camera and talking to him, then with him as soon as he turns to them.

In Episode 21, as Protocol Omega 3.0 was defeated, Zanak sent them away to an unknown, in which one of the members of El Dorado said he treated them like toys. Toudou answered Zanak is someone who doesn't hear insolence. Though, he also said it could be the time to use "him", and finished by saying he was impatient to see what reaction that "him" will have.

Retrieved from "https://inazuma-eleven-go-chrono-stone.fandom.com/wiki/El_Dorado?oldid=11596"
Community content is available under CC-BY-SA unless otherwise noted.