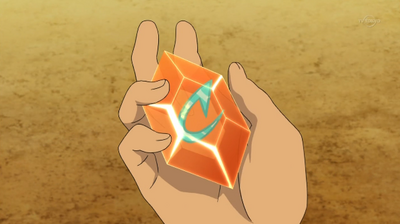 The Chrono Stone is a special stone with a "C" in the middle of it.

It first appeared in Episode 11. Beta used the Sphere Device to seal Endou Daisuke, but his willpower protected him and a collaboration in the timeline caused him to turn into a stone: the Chrono Stone. Imprisoned in this stone, Daisuke can still talk. He told Raimon about the Hasha no Seiten and the Ultimate Eleven.

In the Episode 12, Daisuke told Shindou that he was the first player of the Ultimate Eleven and that he had to Mixi Max with Oda Nobunaga.

In Episode 17, El Dorado's leader, Toudou Heikichi, is seen having a purple Chrono Stone in his hand, in which Endou Mamoru is imprisoned.

In Episode 24, it is shown that Zanak was holding the Chrono Stone that holds Endou Mamoru, which probably means he got it or stole it from El Dorado.

Community content is available under CC-BY-SA unless otherwise noted.